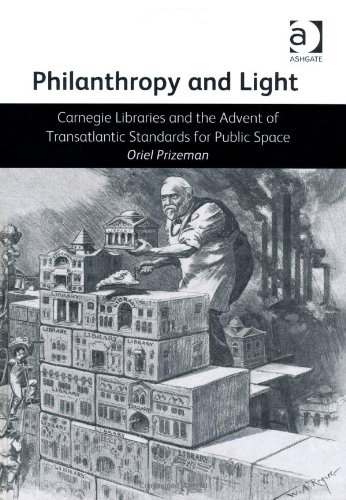 In “Philanthropy and Light,” Oriel Prizeman compares the architecture of Carnegie libraries in Pittsburgh and Birmingham (England). Around the turn of the 20th century, both steel towns were sooty and dark. In such environments, sunlight had to be supplemented by artificial, electric lighting. Consequently, Carnegie library architects were some of the first to develop efficient standards for illuminating public spaces. With helpful illustrations and easily decipherable charts to show lighting levels at various places in the library, such as circulation desks and reading rooms, Prizeman effectively demonstrates how the placement of lights inside Carnegie libraries reflected a genuine quest to improve standards of living and leisure while still reinforcing class differences.

Prizema’s research is thorough, and many of her illustrations and maps were obtained from Pittsburgh repositories, such as the Carnegie Library of Pittsburgh system and the University of Pittsburgh Archives. This volume contains some technical language, but interested adult readers should not encounter much difficulty. Overall, Philanthropy and Light is a recommended read for advanced readers interested in the architectural and social history of public spaces. Behind the doors of her childhood home in Squirrel Hill, little Annette hid a secret—her father was a gambling addict. In an honest and engaging memoir, Annette B. Dunlap recounts her family’s struggles with the agony of addiction and her quest, as an adult, to understand her father’s behavior. The journey takes the author from her own immediate circle to investigating startling information concerning gambling addiction’s hold on the Jewish community. Using a variety of sources from research libraries across the country, including the Rauh Jewish Archives at the Heinz History Center, Dunlap gives her readers fascinating insights on self-discovery, family heritage, and, most importantly, forgiveness. You call yourself a Pittsburgh Penguin fan, but how well do you know Mario Lemieux and Sidney Crosby? What about Les Binkley? Have you been to the Mellon Arena or the Consol Energy center, maybe both? Rick Buker provides enough variety of Penguins past and present for anyone to enjoy. By highlighting the most memorable players and events, as well?as some not-as-famous but equally important to the sports franchise, Buker ensures that Penguins fans of any level will find something new and nostalgic in this collection of Penguins moments and memories. Immigrants to America were often targets of stereotyping and the Scotch-Irish are no exception. Editor Warren R. Hofstra challenges the stereotypes associated with the Scotch-Irish through his compilations of essays in his most recent book. This collaboration offers a new perspective on Scotch-Irish immigrants and focuses on areas they settled, such as southwestern Pennsylvania. Readers interested in immigration history, American history, or the Scotch-Irish history in America will find the book informative and thought provoking. Author James S. Wojcik grew up listening to the stories his father and his father’s friends shared about World War II. With perspective born of maturity, Wojcik felt compelled to record the stories orally and transcribe them for this book. Although the two men featured, his father and Uncle Mike, worked on a cargo ship, they encountered many of the threats common to all sailors and soldiers during the war. This book is a tribute to the unsung heroes of war, those who, without receiving special recognition, put their lives on hold and went to foreign lands to work and fight.